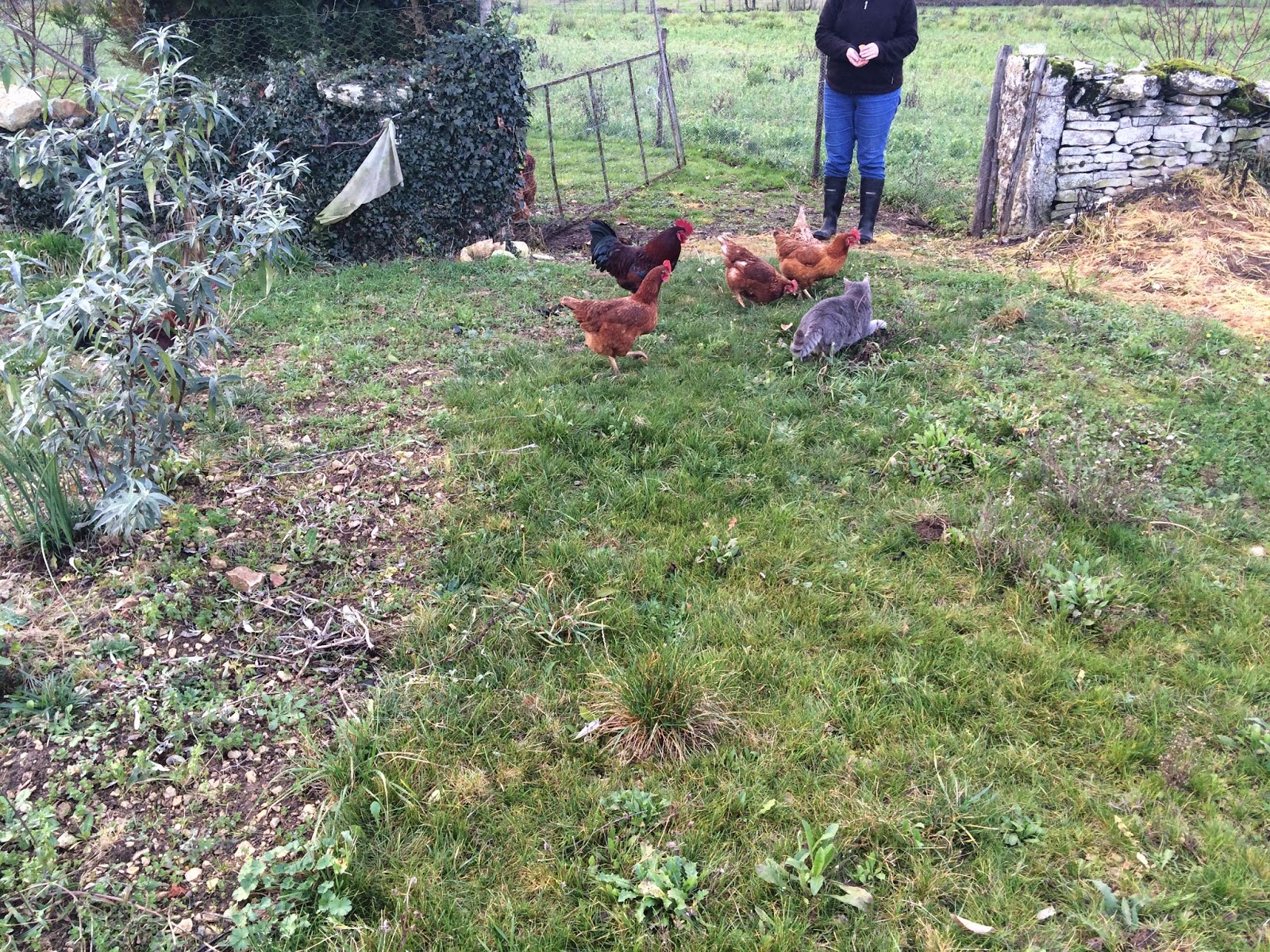 Wow!  It just seems like yesterday that I made my last post, and here it is two months later.

I had heaps of catching up to do after my recuperation, and have been so busy that time has just flown by.  In fact there are still things that I am behind on.

October saw the death of one of my chicks.  I had purchased two dwarf chickens (not bantams) as my "mother hens" for next year.  The sweetest of the two was still a bit too young to cope with being outside in the cold and unfortunately she died.  I was a bit sad as she was the one that liked to cuddle.  A lovely little personality and quite tame as well.

Two weeks later my rooster took ill.  He was quite often a bit "off colour" as he ate anything that he could fit in his beak.  Bees, rubbish, you name it.  If it could be swallowed - it was swallowed.  He developed sour crop and could not be saved.  Unfortunately he was very much a "don't touch me" kind of rooster, so by the time I could touch him, he was too weak and sick to survive.  A real shame as he was a superbe rooster and absolutely enormous.  I have a replacement, but he is just not quite as good as my original.  Nothing wrong with him, but the first one was a hard act to follow.

November saw heavy frosts starting to hit and everyone racing to get ready for winter.  The garden however was still in full flower, so I am still now - in december - doing my autumn pruning!  Another week should see it done for the year.

We spent a weekend weather proofing and insulating the hen house.  It really is a chicken palace now!  I use the deep litter method, so it is very cosy inside.  The mice think so too..... grrr.  They are so bold that they don't even move till you get right up to them.  Have been putting mint in the house which mice hate, but it only lasts a few days to a week and has to be redone.  I will get rid of them though!  If all else fails, I will lock Sophie in there overnight.....

The spare bedroom is now much better organised and more user friendly for my sewing projects.  Cannot wait to start making a few new outfits.  Same with the office.  I had a major sort out and reorganised a lot of things and now have a good work space for my craft projects as well as desk space for working.  Much nicer and easier to work there now.

Guy and Eric are loving our new heating.  The wood pellet fire is fabulous and they think it is just for them.  There is now a basket in front of it and they take turns curling up in it and basking in the warmth.  Think I might have to get a second basket so they can each have their own.  Sophie, meanwhile, has discovered the joys of a heated bed.  We have a heating pad in her bed in one of the outbuildings.  It is on a timer and turns on around 17h30 and off around 08h30.  Between those hours she is not to be found outside.  In fact, she demands dinner at 1700h and then goes to bed!  In the morning she stays in bed till it starts cooling off, and quite often is still in bed late in the morning.  Very funny when you go looking for her and call out for ages, only to go into the dependance and see a little furry head poking out of the cat bed all blinky and fuzzy eyed.

We planted a new apple tree this weekend, part of the plan of getting ready to replace a few fruit trees which are very old and not fruiting very well anymore.  It will bear fruit in about three years, so that will be just in time for the current old trees to be fading out.  Gradually over the next few years we will replace some of the older fruit trees and rejuvenate the orchard.  Will be nice to have eating apples as well as the current cooking and cider apples.

Our neighbour has been in hospital the past few weeks.  All ok now and he is back home, but his chickens have meantime moved out and decided they prefer to live chez nous.  I was feeding them whilst he was unwell, and combined with the fact that they have always wandered in when the gate is open and visited our terrain, they now think I am their owner.  They follow me around everywhere and if they hear my voice they come running (have you ever seen chickens run flat out?  Funniest thing you have ever seen!!!).  After the fruit tree planting saturday I was digging up the parsnips and the last of the carrots and beetroots with the assistance of his flock.  Really funny to have a flock of chickens poised attentively around you waiting for a juicy worm or bug to be unearthed.  Had to be careful not to tread on one of them if I stepped backwards!  Afterwards I was trying to put them back in their coop, but it was more like a Keystone Cops or Benny Hill episode than anything.  I am tempting them through the gate and closing it, to turn around and walk back to the house, only to find more chickens to herd towards the gate, shepherd through, close, turn, more chickens..... repeat repeat repeat.  The cheeky beggers were walking in the gate and along the fence a bit (till behind a tree and out of sight), then flying back over to my side again whilst I was busy getting their flock mates through the gate.  All in the freezing cold without my coat on.  I was not a happy bunny, but had to laugh as it was so ridiculas.

The photo above was taken by Wayne on his iphone.  Me wrangling the neighbours chickens with the assistance of Sophie.  She loves chickens, and always helps me feed, lock up etc every day.  Mind you, she is also quite fond of sampling any tidbits I throw out for them as well......

Anyway, Christmas is coming quickly and hopefully things will slow down a bit.  We are celebrating on Christmas Eve with our neighbours (French celebrate Christmas Eve, not Christmas Day) which will be lovely.  We are sharing the food preparation and it should be a great night.  The 25th we will be recovering quietly at home, and gathering strength for the Orphans Picnic on Boxing Day which we are hosting.  (Casual potluck for friends in our group who are not travelling to family for the fetes.)

Hope everyone has a lovely Christmas and look forward to having more time in the New Year to blog more frequently.  Best wishes!
Posted by Debbie at 22:58 No comments: